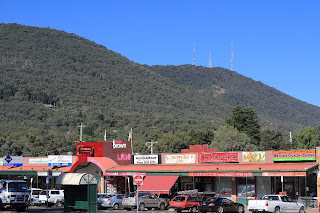 Study Area. All observations and photographs have been taken within 3 Km of the Montrose township between 1988 to 2012 at elevations from 250 metres to 630 metres, predominantly on a private natural bush residence adjacent to the Dandenong Ranges National Park and within the National Park. The area is predominantly dry sclerophyll forest dominated by Red Sringybark (Eucalyptus macrorhyncha) and Long-leaved Box (Eucalyptus goniocalyx), with a sparse understorey of Exocarpos, shrubs, sedges and grasses. There are several wetter gullies within the study area with tall stands of Mountain Grey Gum (Eucalyptus cypellocarpa), Messmate (Eucalyptus obliqua) and Manna Gum (Eucalyptus viminalis), with a dense understorey of  acacias, tree ferns and shrubs.

Mt Dandenong is the remnant  neck of a Devonian volcano and composed of Dacite and Rhyodacite. Soils are generally poor, thin and subject to rapid drying during hot weather. The Dandenong  Ranges are prone to bushfire's and frequently subject to controlled fuel reduction burns.

Given that Montrose is located on the fringe of a City of more than 3 million people, the diversity of fauna and flora is remarkable.

All Photographs are
copyright©Ian Waldren 2012.